Is there anything better than the smell of fresh bread or cinnamon rolls baking? The aroma wafting through your house, it’s practically intoxicating. These pumpkin cinnamon rolls are definitely worth getting out of bed early for!

How to Make Cinnamon Rolls

Making homemade cinnamon rolls might seem intimidating, but trust me, if I can make them, so can you! Don’t fear the yeast, friends. It’ll be fine. Honestly, you really just need patience. Here’s a brief rundown of the steps (scroll down for the detailed printable.)

How long to bake cinnamon rolls? This particular recipe bakes at 375 degrees F for 25-30 minutes.

How to Make Cinnamon Roll Icing

Cinnamon roll icing is super easy to whip up. Simply mix together the cream cheese, butter, and vanilla until smooth. Then add in the powdered sugar and a couple tablespoons of milk at a time until your desired consistency is reached. It should be thick, but still able to drizzle easily.

How to Store Cinnamon Rolls

Can You Freeze Cinnamon Rolls?

Yes, these can be frozen either before or after baking, tightly wrapped and sealed to avoid freezer burn. They will keep up to 1 month.

To freeze these cinnamon rolls before baking, freeze after they have been sliced into rolls, but before the second rise.  When you are ready to bake, remove from the freezer and allow to come to room temperature and rise, then bake as directed.

To freeze after baking, cool completely, wrap them well in plastic wrap and foil, then place them in an airtight container to freeze. It is best to freeze before frosting.

Watch Them Being Made 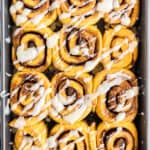 For important recipe tips and storage, please refer to the full article and watch the video.