Delicious homemade crispy hash browns! Serve these potatoes as a side on their own or as a full breakfast or brunch with smoked salmon, capers, red onion, and a dollop of Greek yogurt. So good!

It seemed like an eternity for my kids to like potatoes. Aren’t loving potatoes just built into our genetic code? Lol. Anyway, mashed potatoes, a baked potato, and these hash browns finally turned them around – must be the crispy outside!

Hash browns (also referred to as hashed browns) have been around since the 1890’s, when they started appearing on New York City breakfast menus. Gotta love New York! They’re super popular now, of course, all over the United States in diners everywhere.

They’re basically just shredded potatoes fried in a pan, but what might sound boring, is anything but. With a crispy outside, tender inside, and seasoned, they are so delicious!

With the toppings, it’s a delicious full breakfast or brunch offering, instead of just a side dish.

How to Make Hash Browns

They’re so incredibly easy to make. At the most basic level, you simply grate potatoes, rinse them, squeeze them dry, and cook in a hot pan with oil, flipping once until they’re crispy on both sides.

All potatoes need and love salt, and hash browns are no exception. You could further bump up the flavor by adding in some garlic powder, fresh herbs, or my everything seasoning blend (<– my favorite way!)

How to Make Crispy Hash Browns

No soggy potatoes for me, thanks! Let’s make sure they’re crispy. Here’s how:

It depends. Are you getting them from a fast food joint or are you making them at home? Hash browns from diners and drive-throughs are often deep-fried and loaded with trans fats – unhealthy. But you can make these homemade hash browns without any guilt.

Potatoes are definitely not a health food, but they’re not bad for you, either since they’re a whole food and minimally processed.
Are hash browns gluten free? With just potatoes, oil, and salt, yes they are gluten free.
How many carbs in hash browns? This particular recipe has 37 carbs per serving (not including the toppings), and only 1 additional carb with the toppings. 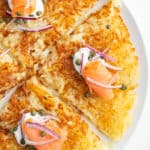 5 from 12 Ratings
Delicious homemade crispy hash browns! Serve these potatoes as a side on their own or as a full breakfast or brunch with smoked salmon, capers, red onion, and a dollop of Greek yogurt. So good!
Print Recipe Rate Recipe Pin Recipe
Prep Time 10 minutes
Cook Time 15 minutes
Total Time 25 minutes
Servings: 4

Calories: 268kcal | Carbohydrates: 38g | Protein: 11g | Fat: 9g | Saturated Fat: 6g | Cholesterol: 7mg | Sodium: 641mg | Potassium: 966mg | Fiber: 5g | Sugar: 2g | Vitamin A: 25IU | Vitamin C: 42mg | Calcium: 42mg | Iron: 2mg
Nutritional information given is an automatic calculation and can vary based on the exact products you use and any changes you make to the recipe. If these numbers are very important to you, I would recommend calculating them yourself.