These Easy Cinnamon Rolls turn your basic canned Pillsbury cinnamon rolls into something next level! Ultra moist, fluffy, and sweet, they’re baked in heavy cream and topped with an irresistible cinnamon sugar, plus the extra icing. So simple, quick, and absolutely incredible!

Pillsbury Cinnamon Rolls Made Next Level

These easy cinnamon rolls are part recipe, part hack. They start with your everyday Pillsbury Grands but instead of just baking them on a cookie sheet, they’re baked with heavy cream and topped with buttery cinnamon sugar.

These simple additions make these cinnamon rolls extra sweet, extra moist, extra fluffy, and extra good! Once you make them this way, you’ll never go back to making them the boring, basic way again.

Though these only require maybe 5 minutes of prep, no one will ever guess you started with a can. They’re perfect for those moments when you need something a little special and just don’t have the time…like around the holidays and for out of town guests.

You’ll need just 5 ingredients for this sweet breakfast treat.
(Scroll below to the printable recipe card for details and measurements.)

How to Make Easy Cinnamon Rolls

This Pillsbury cinnamon roll hack takes just a few minutes to prepare. Perfect for busy mornings!
(Scroll down to the printable recipe card for details and measurements, and don’t miss the video below.)

Here are a few tips for making this easy cinnamon roll recipe.

What to Serve with Cinnamon Rolls

These can be enjoyed for breakfast or dessert. Personally, I think they’re perfect with a cup of coffee in the morning. If you want to balance it out with another dish or two to make a proper breakfast, you can never go wrong with some bacon or homemade breakfast sausage and scrambled eggs. 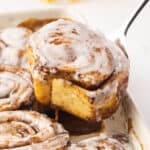