Cinnamon Sugar Chex Mix is an addictive party snack mix with a crunchy and sweet cinnamon coating. Made with three varieties of Chex cereal, pretzels, and nuts, this homemade Chex mix is great for gift giving, party favors, game day, or anytime snacking!

Is a party really a party without some Homemade Chex mix? It’s always one of my go-to party snack ideas when it comes to feeding a crowd. It’s so easy to whip up and usually makes a lot.

This cinnamon sugar Chex mix is without chocolate and a bit more evergreen and traditional than some holiday mixes, though still sweet. The sweetness comes from the cinnamon sugar butter mixture and crunchy topping instead of chocolate and provides a nice contrast to the salty pretzels and cereals. While it does have a holiday feel thanks to the cinnamon sugar, this version isn’t exclusively for Christmas and can be enjoyed anytime.

This cinnamon sugar Chex mix makes an excellent holiday gift, as well as a party favor to give away. Or just serve it up in a big bowl at your next holiday party and watch it disappear!

This party snack mix is made with several types of Chex cereal and fun add-ins like pretzels and pecans.
(Scroll below to the printable recipe card for details and measurements.)

If you don’t like one or more of the ingredients, that is fine. Just add something else you enjoy! This Chex Mix recipe is so easy to customize to your taste. Just make sure you keep the same ratios so the sauce and topping amounts aren’t too much or too little.

Here are a few ideas for other sweet Chex Mix add-ins:

This homemade Chex mix recipe is super easy to make. I think the hardest part is not sneaking any pieces while it cools!
(Scroll below to the printable recipe card for details and measurements.)

Here are a few suggestions for making this sweet & salty Chex mix. 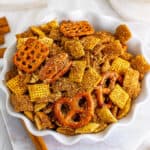