Cinnamon Toast is a classic and simple childhood favorite that dates back eons! It makes for a yummy breakfast or quick afternoon snack.

I can hear you thinking, “A recipe…for cinnamon toast? Really? Don’t you just spread butter and cinnamon on toast?” I mean, sure. This “recipe” is super simple, but lemme me tell you, it will elevate your toast to the next level.

Instead of just buttering a slice of toast and sprinkling on some cinnamon, we’re making a paste with butter, cinnamon, vanilla, and salt, spreading it all over the bread, then baking it before popping it under the broiler.

By baking it, the bread gets nice and toasty, then sticking it under the broiler at the end makes certain the topping is caramelized. It’s like creme brûlée cinnamon toast!

This easy breakfast treat is made with just 6 ingredients – and I bet most of them are already in your cupboard.
(Scroll below to the printable recipe card for details and measurements.)

How to Make Cinnamon Toast

While you may just want to slather butter and cinnamon on a slice of toast, I promise you that following these quick steps is worth the 10 minutes!
(Scroll below to the printable recipe card for details and measurements.)

Make the perfect cinnamon toast with these easy tips.

This cinnamon sugar toast is an easy breakfast idea for any day of the week. Enjoy it with your favorite eggs – whether scrambled eggs, fried eggs, or poached eggs – and some breakfast sausage or bacon for a quick and balanced meal.

You can also whip this up as an afternoon snack when you’re craving something a little sweet. It’s truly perfect anytime! 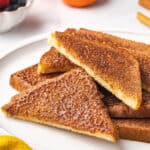 Use different bread. You can use whole wheat or brioche bread instead of white bread. All delish! Try brown sugar. Try swapping out the granulated sugar with brown sugar (or a combo of both!) So good. But do not skip the sugar.