Made with apple whiskey and apple cider, these Apple Pie Jello Shots are topped with whipped cream and cinnamon for a fun twist on basic jello shots. Perfect for fall parties!

These apple pie jello shots are exactly what you need to make your next fall party a little more fun! The apple cider gives them the warm, spiced apple pie flavors, while the apple whiskey adds a boozy touch. Then they’re topped with whipped cream and cinnamon, so they double as both a dessert and an adult beverage.

Hand these out at a get-together and rarely does anyone pass up a second one! Chances are, stories of everyone’s college days will start to fly. Ah, good memories.

Apple pie shots are made with just 3 ingredients, plus 2 (optional) toppings to make them resemble even more of an apple pie.
(Scroll below to the printable recipe card for details and measurements.)

Making these jello shots is so easy. Here’s a brief summary:
(Don’t miss the detailed printable recipe card below.)

If this is your first time making jello shots, there are a few things to keep in mind so the process is easy and smooth.

Allow the jello shots to chill in the fridge and then, once they’ve set completely, fasten the plastic lids on them. After that, you can easily stack them so they don’t take up so much space. Keep in the fridge until you’re ready to serve them, then add the whipped cream and cinnamon. In the refrigerator, they will stay good for 3-5 days. Once removed from the fridge, they don’t last long. Plan to consume the shots within 30–45 minutes. 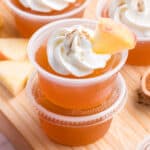 Calories: 64kcal | Carbohydrates: 3g | Protein: 1g | Fat: 1g | Saturated Fat: 1g | Polyunsaturated Fat: 1g | Monounsaturated Fat: 1g | Cholesterol: 1mg | Sodium: 1mg | Potassium: 28mg | Fiber: 1g | Sugar: 3g | Vitamin A: 6IU | Vitamin C: 1mg | Calcium: 3mg | Iron: 1mg
Nutritional information given is an automatic calculation and can vary based on the exact products you use and any changes you make to the recipe. If these numbers are very important to you, I would recommend calculating them yourself.