These classic Potato Latkes have a tender inside and crispy exterior. While they’re traditionally made for Jewish holidays, anyone can enjoy this latke recipe. With a few simple ingredients and deep fried, there’s absolutely nothing quite like them!

They are fantastic all on their own, but we love serving them with homemade applesauce.

We’re a blended family, celebrating both Jewish holidays and Christmas every year. Since my sister hosts Christmas dinner, my mom and I take turns hosting Hanukkah. One of our favorite traditions is making potato latkes together…and every year we always regret not making a double batch, because they disappear in a flash!

Latkes – or potato pancakes, if you prefer – pronounced “lat-key,” are traditionally made for the Rosh Hashanah, Passover, and Hanukkah holidays. BUT you do not need to be Jewish to enjoy them. Their deliciousness is universal!

Latkes are small potato pancakes that are comparable to corn fritters, except the main ingredients are potatoes, egg, some sort of starch, and sometimes onion (like my recipe.) Perfect latkes have a tender inside and crispy exterior – they are beyond scrumptious!

Since there always seems to be some confusion, I feel compelled to point out that latkes and hash browns are not the same thing! And latkes are never made with mashed potatoes. (Mashed Potato Cakes, while fantastic, are completely different.)

For our family recipe, here’s what you’ll need:
(Scroll below to the printable recipe card for details and measurements.)

How to Make Latkes

Latkes can be made two different ways (although, I don’t completely agree with this. HA.) – one where the potato is shredded (perhaps this is where the confusion of comparing them to hash browns comes in), the other where the potato is pureed with the other ingredients (my preferred method.) Here are a few tips:
(To make this latke recipe, follow the steps below included in the printable recipe card and watch the video.)

How to Store Latkes

Potato pancakes, like most fritters and fried food, are best eaten right away while they’re hot and crispy. You can definitely enjoy leftovers, though (if you’re lucky enough to have any!)

Can you make latkes ahead of time? You can make the batter up to 2 hours ahead of frying it (stored in the fridge.) Once fried, latkes will keep in the fridge for up to 2 days.
How to reheat latkes: to reheat, place them in a single layer on a baking sheet in a 350° oven until they’re crisp again, about 10 minutes.
Can you freeze cooked potato latkes? Yes. Fry them, drain off any grease, and allow to cool completely. Store in freezer bags for up to 2 weeks. Defrost when ready to use, and reheat.

What to Serve with Latkes

Traditionally, latkes are served with applesauce or sour cream. Here are a few suggestions: 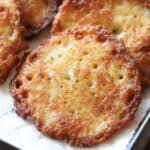 Calories: 30kcal | Carbohydrates: 4g | Protein: 1g | Fat: 1g | Saturated Fat: 1g | Cholesterol: 14mg | Sodium: 46mg | Potassium: 81mg | Fiber: 1g | Sugar: 1g | Vitamin A: 20IU | Vitamin C: 1mg | Calcium: 6mg | Iron: 1mg
Nutritional information given is an automatic calculation and can vary based on the exact products you use and any changes you make to the recipe. If these numbers are very important to you, I would recommend calculating them yourself.