My very first job was at a frozen yogurt shop in the mall. I was 15. I got fired after three months because the owners accused me of stealing money out of the till. One of their long-time “trusted” workers was actually the one who was doing it, but I couldn’t prove it. So I was out.

My second job was in that same mall at the brand new Victoria’s Secret. My responsibility? I stood at the front of the store all day long and made sure the underwear looked nice. I wanted to hang myself. Left that job after only two months.

Then came Dominoes Pizza. I got a job with them answering phones, and then eventually made the pies. I worked there for over two years. My boss was great, co-workers were super fun, and… pizza. Brought home free dinner a lot. And I never got tried of it. Too much variety. 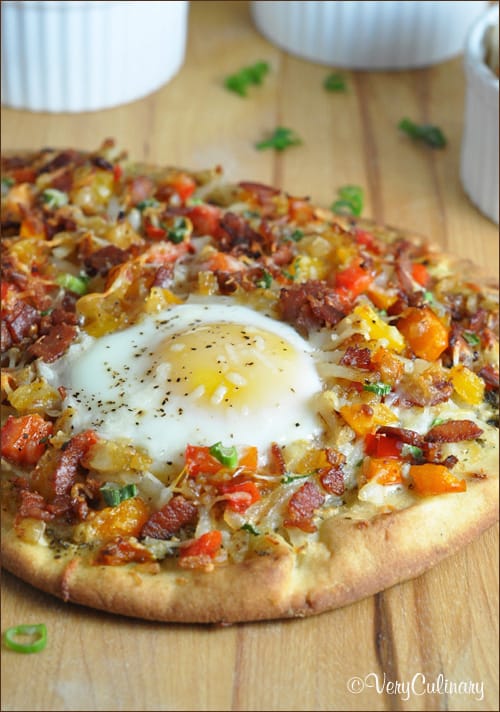 Of course back then, at the ripe old age of 17, I never would have thought to put caramelized onions, grilled corn, or reduced balsamic vinegar on a pizza. No pizza joint did that in 1986 – at least not where I lived.

And I certainly wouldn’t have thought to put hash browns and eggs on top. But I do it all the time now. Breakfast pizza is the best. 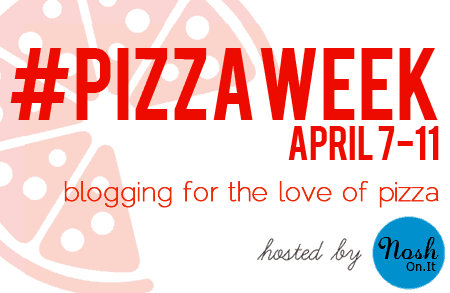 In a large nonstick sauté pan, cook the bacon over medium heat, stirring occasionally, until crispy, about 7 minutes. With a slotted spoon, transfer to a plate lined with paper towels. Add the bell pepper and onion to the pan with the rendered bacon fat and sauté until tender, about 5 minutes; season with salt and pepper. Transfer to a bowl. In the same pan, heat the butter; once melted add in the hash browns and cook, stirring occasionally, until golden, about 7 more minutes. Transfer to a bowl.

To assemble the pizzas, place flatbread on baking sheets lightly coated with cooking spray. Spread the pesto evenly on each flatbread. Then evenly distribute the cheese, hash browns, pepper/onion mixture, bacon, and scallions. Move a portion of the toppings out of the way to make 2 little wells (1 on each flatbread.) Crack eggs into the wells. Sprinkle with a little pepper.

Bake until the crust is golden and the eggs are set, but still slightly soft, about 15 minutes. Serve immediately.