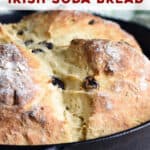 This Irish Soda Bread recipe could not be easier or more delicious. No-knead, no rising, no waiting. Amazing warm from the oven on its own or with a slab of butter!

Even though I conquered my fear of yeast last year, I still prefer bread that doesn’t require it. Because…EASY. Most breads you have to mix, knead, let rise, punch down, let rise again. I mean, totally worth it! BUT it’s such an all-day thing. Another reason why I’m completely obsessed with Irish Soda Bread – no kneading, no waiting, so easy and delicious!

What is Irish Soda Bread?

Irish Soda Bread isn’t actually Irish at all. Or wasn’t originally, anyway. Native Americans were making it before the Europeans came to America and just called it soda bread. The Irish, as well as many European countries, didn’t produce much wheat back in the 1800’s to make yeast breads. So they adopted the soda bread as their own, thus the name Irish Soda Bread.

Irish Soda Bread is actually a quick bread, using baking soda as the leavening agent. The chemical reaction between the baking soda and buttermilk causes carbon dioxide, which makes it rise. Because it’s so easy with virtually no kneading involved, this bread has become widely popular.

This Irish Soda Bread recipe is really more like a quick bread, but tastes like you labored over it all day. It’s soft and hearty, with a touch of sweetness and almost tastes like a giant biscuit!

Scroll down to the detailed printable recipe card for exact measurements and directions.

I adapted this recipe from Ina Garten, baking it in a cast iron skillet instead of on a sheet pan (which also works!), omitting the orange zest (because I was lazy), and using raisins instead of currants (because, omg, where are currants in the grocery store??) The house smelled amazing and the taste sent me into a frenzy, just like all freshly baked bread.

The buttermilk and raisins are the secret to its deliciousness; it really doesn’t need anything else. But you also can’t go wrong with a little slab of butter or jam!

How long does Irish Soda Bread Last? This bread is best stored tightly wrapped (or in an air safe container) on the counter in a cool, dry area for about 3 days.
Can I freeze Irish Soda Bread? Yep! Bake and cool completely, then double wrap the loaf, first tightly in plastic wrap, then transfer to a freezer-safe plastic bag. It will keep for up to 2 months. Thaw overnight in the fridge and bring to room temperature before serving.

How To Serve Irish Soda Bread

There are many ways to enjoy Irish Soda Bread, but most people just eat it fresh from the oven with a slab of butter.

How to Make Irish Soda Bread

This bread is a deceptively simple and made with little effort, but with impressive results. The printable recipe card below lays out the steps to making this recipe. You’re going to love it so much. Try it! 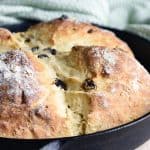 5 from 8 Ratings
This Irish Soda Bread recipe could not be easier or more delicious. No-knead, no rising, no waiting. Amazing warm from the oven on its own or with a slab of butter!
Print Recipe Rate Recipe Pin Recipe
Prep Time 15 minutes
Cook Time 40 minutes
Total Time 55 minutes
Servings: 8 (1 loaf)