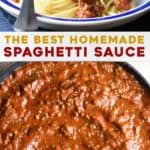 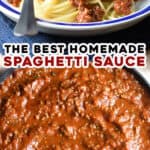 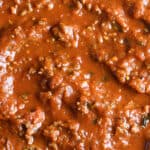 This hearty Homemade Spaghetti Sauce, made with sausage, ground beef, and three kinds of tomatoes, is perfect over spaghetti or in lasagna!

Unintentionally, spaghetti has become our traditional Christmas Eve dinner. I think it was about seven years ago I served lasagna, which was great since I prepped it the night before. But there’s only four of us, and it was just too much. So the next  year I made spaghetti and my favorite classic meatballs, since I always have a batch in the freezer! The following year, though, I simply served this homemade spaghetti sauce…and it’s stuck ever since.

I laugh every year I serve it, feeling like I should be making something extra special instead. Then without fail, both kids double check with me that morning, “Mom, you’re making spaghetti with the meat sauce, right?” Which is why I’ll be making it for eternity. Plus it’s so easy, delicious, and not ordinary!

Is there even a standard Christmas Eve meal? Turkey is synonymous with Thanksgiving and Prime Rib for Christmas, but everyone I know actually goes out to dinner, so I don’t even know what most people serve. Anyway, there are no rules, which is why I make a glazed ham for Thanksgiving. I’m such a rebel. HA.

Everyone should have a go-to homemade spaghetti sauce recipe in their arsenal. I know jarred sauce is so convenient, but there’s nothing like homemade sauce.

This is my favorite – maybe not considered a quick spaghetti sauce, since you really want it to simmer for several hours, which deepens the flavors, but definitely an easy spaghetti sauce. And also perfect to use as the sauce layer in lasagna!

Who knows, maybe this will become your traditional Christmas Eve dinner, too. If not, there’s 364 other days to enjoy it!

Is there a difference between spaghetti sauce and Bolognese sauce?

Yep! I know they look and smell the same, but marinara sauce is basically tomato sauce with herbs and onion, whereas Bolognese sauce is meat based and typically made with carrots, celery, wine and/or milk. This particular recipe is sort of a cross between the two!

Why use sugar in spaghetti sauce?

Sugar gets such an unfair rap these days. It’s not the enemy, friends. Sugar, like salt, is a great ingredient that gives balance to food and helps with overall flavor. It is especially needed in a spaghetti sauce to help cut the acidity from the tomatoes.

Can spaghetti sauce be made in advance and frozen?

Definitely! In fact, I recommend making it in advance. Start it in the morning and let it low simmer for hours. The longer it cooks, the better!

How long does spaghetti sauce last in the fridge? It can be made ahead and kept refrigerated in an air-tight container for up to 3 days.

Can you freeze spaghetti sauce? Yep! You can further extend its shelf life by freezing it, covered in an airtight container, for up to 4 months.

What to do with leftover spaghetti sauce

We love leftover spaghetti sauce and bank on their being some the next day. Here are a few great ways to use it:

How to make spaghetti sauce 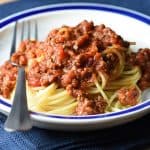