Serve these alongside some Witches Brew for a super fun, festive get together!

It’s hard to believe that the movie Hocus Pocus was released nearly 30 years ago! How is that possible? Honestly, it wasn’t a good film then and it remains mediocre. But we still watch it every year. Harmlessly hokey and family-friendly, it’s just become tradition and we actually look forward to it.

These easy Hocus Pocus Halloween cupcakes are for this year’s movie watching. They are a delicious, decadent homemade chocolate cupcake piled high with vanilla buttercream frosting. The frosting is dyed Halloween colors and each piped in a specific way to represent one of the beloved Sanderson sisters.

But, don’t worry! Even if you’re not into Hocus Pocus, these work great as a Halloween cupcake idea in general. I mean, how can you go wrong with delicious chocolate cupcakes topped with colorful, sweet frosting? Super fun.

These chocolate cupcakes are made entirely from scratch, with just a handful of ingredients that you likely already have on hand.
(Scroll below to the printable recipe card for details and measurements.)

For the Halloween Cupcakes:

For the Vanilla Buttercream

How to Make Hocus Pocus Cupcakes

Talk about easy cupcakes for Halloween! Though these may look fancy, they’re super simple to make. Here’s a brief summary:
(Scroll below to the printable recipe card for all the details.)

If this is your first time making Halloween-decorated cupcakes, here are a few things to keep in mind.

Here are some frequently asked questions about this Disney dessert and Halloween cupcakes in general. 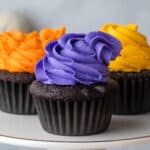 For the Vanilla Buttercream