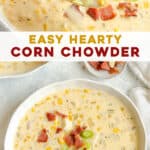 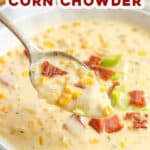 Really love corn? Serve this with a little cornbread on the side!

We’re in what we call “false spring” – where it’s chilly, then the weather gets super hot and we start thinking it’s time for flip flops…and then it’s cold and rainy again. Mother Nature likes to toy with us! But my husband said, “well, at least you have a reason to make your corn chowder again.”

There are so many soups I absolutely love, but if given the choice between a brothy soup and a thick creamy chowder, I’ll go for the chowder. This easy homemade corn chowder gets made all year. It’s everything a chowder should be – thick, creamy, hearty, flavorful, and simple. The rich broth pairs perfectly with the sweet corn. Pure comfort food.

Here’s what you’ll need to make this corn and potato chowder:
(Scroll below to the printable recipe card for details and measurements.)

How to Make Corn Chowder

To make this Potato Corn Chowder recipe, follow the detailed steps below included in the printable recipe card and don’t miss the video below.)

This chowder is really easy and all made in one pot, but if you still need (or prefer) to make it in your crock pot, you certainly can!

Leftovers: Leftovers will keep in a tightly sealed container in the refrigerator up to 3 days.
To reheat: Reheat on the stove or in the microwave over low heat until warmed through. If it seems too thick, you can add a little chicken broth to thin it out.
Can you freeze corn chowder? I’m not a fan of freezing this soup since the heavy cream tends to separate once thawed and the potatoes break down creating a weird texture – the overall soup just doesn’t taste all that great. If you simply must freeze it, omit the cream initially and add it once thawed and when reheating the soup. Freeze up to 1 month. Thaw in the fridge overnight.

What to Serve with Corn Chowder?

This soup is pretty substantial all on its own, but here are some great additions I serve with it sometimes: 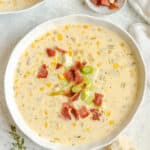