Some of our other popular restaurant copycat recipes include, Pasta Fagioli, Toasted Ravioli, and Disney Dole Whip. You can make them better at home for a lot less money!

Zuppa Toscana is one of Olive Garden’s most popular recipes, and probably their most popular soups. This homemade Zuppa Toscana recipe is a copycat version, loaded with Italian sausage, crispy bacon, spinach (instead of kale), potatoes, and a creamy broth. It’s completely irresistible!

What is Zuppa Toscana?

Zuppa translated is soup and Toscana means Tuscan – so, Tuscan Soup! However, this is actually not a traditional soup from Tuscany, but rather a soup that was simply created and made very popular in America by the Olive Garden restaurant chain. They make it with sausage, bacon, potatoes, and kale.

The list of ingredients for this soup is incredibly short, but you’d think it was a mile long considering how flavorful it is. Here’s the rundown:
(Scroll below to the printable recipe card for details and measurements.)

How to Make Zuppa Toscana Healthier

How to Make Zuppa Toscana

This soup is all made in one pot and so easy! Here’s a brief summary:
(Scroll down to the printable recipe card for details and measurements, and don’t miss the video below.)

What to serve with Zuppa Toscana soup? This soup is very hearty on its own and doesn’t need much else, but we often enjoy it with homemade garlic bread or popovers to mop up the last dribbles in the bowl. Pure comfort in a bowl and will hit the spot on a cold night! 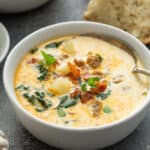 Use kale. Instead of spinach, use kale, which is what Olive Garden uses. Try a different variety of sausage. Swap out the spicy Italian sausage for a mild or sweet variety. Make it keto-friendly by swapping out the potatoes for chopped cauliflower florets. For a dairy free (whole 30) version, substitute the heavy cream for a 15 ounce can of full fat coconut milk (using the solid white cream portion only.) Remove excess grease at the end of cooking by letting it cool for about 15 minutes and then slowly skim off the top layer of grease.