This easy Ham and Potato Soup recipe can be made with ham hocks or a leftover ham bone. It’s so simple, but big on flavor! Rich, hearty, and so comforting on a chilly night.

Ham is my main protein of choice for Thanksgiving, and I have to say, leftover ham for five days afterward is so much better than turkey! I always make my breakfast enchiladas the next morning, ham salad for lunch, and this easy ham and potato soup over the weekend. It’s the best use of a ham bone ever and never disappoints.

If you don’t have a leftover ham bone, no worries! This recipe is written with meaty ham hocks, which also makes it a perfect year-round soup.

Here’s a quick list of what you’ll need for this ham and potato soup recipe:

Super simple ingredients that create so much flavor in every spoonful.

How to Make Ham and Potato Soup

Here’s a quick summary of how to make this soup. Scroll below for the detailed printable.

Leftovers will keep in a tightly sealed container in the refrigerator up to 3 days. Reheat on the stove or in the microwave over low heat until warmed through. If it seems too thick, you can add a little chicken broth to thin it out.

Can you freeze ham and potato soup? I’m not a fan of freezing this soup since the half-n-half tends to separate once thawed and the potatoes break down creating a weird texture – the overall soup just doesn’t taste all that great. If you simply must freeze it, it’s safe to eat up to 3 months. Thaw in the fridge overnight and cook as directed.

What to Serve with Ham and Potato Soup

This soup is pretty substantial on its own, but I usually serve it with oyster crackers, focaccia, or popovers to mop up the last dribbles in the bowl.

Watch It Being Made 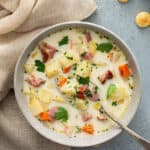 5 from 9 Ratings
This easy Ham and Potato Soup recipe can be made with ham hocks or a leftover ham bone. It's so simple, but big on flavor! Rich, hearty, and so comforting on a chilly night.
Print Recipe Rate Recipe Pin Recipe
Prep Time 15 minutes
Cook Time 20 minutes
Total Time 35 minutes
Servings: 6