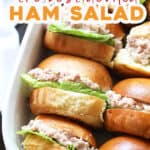 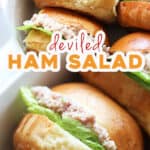 Put your leftover holiday ham to great use in the best ham salad recipe! Make a ham salad sandwich or ham spread for crackers as an easy appetizer. So easy and so delicious!

What is Ham Salad?

Ham salad is a popular recipe that resembles chicken salad and tuna salad. The main ingredient is (cold) ham, of course, and is mixed with chopped up vegetables and relish, then combined with a mayonnaise dressing. The ham is either ground up or diced, then used as a spread for crackers or used on bread for a ham salad sandwich.

As mentioned, the first time I ever had it was in college. The second (third, fourth, fifth – you get it – times) were all while I lived in Minnesota. It almost always made an appearance at baby showers and luncheons, served on crackers or slider rolls with a little lettuce. And I would unashamedly eat my weight in it.

There are a few variations for ham salad, starting with the texture and also the mix-ins.

How to Store Leftovers

Ham Salad is typically chilled, either on crackers or as a ham salad sandwich. Since it contains mayonnaise, it should not be left out any longer than 2 hours.

One of my very favorite reasons for serving a ham on Christmas and Easter is for the leftovers so I can make ham balls and this deviled ham recipe. The other 363 days of the year, I just buy a pre-packaged thick ham steak, which also gets the job done!

Watch Ham Salad Being Made 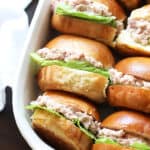 My ham always has plenty of salt, so I don’t ever add any extra or it would be too much. Give it a taste before serving and adjust the salt to your liking. Nutritional value does not include the rolls or crackers. For recipe notes and variations, please refer to the full article.

Calories: 228kcal | Carbohydrates: 1g | Protein: 14g | Fat: 18g | Saturated Fat: 3g | Cholesterol: 75mg | Sodium: 931mg | Potassium: 208mg | Fiber: 1g | Sugar: 1g | Vitamin A: 73IU | Vitamin C: 16mg | Calcium: 10mg | Iron: 1mg
Nutritional information given is an automatic calculation and can vary based on the exact products you use and any changes you make to the recipe. If these numbers are very important to you, I would recommend calculating them yourself.