Made with just a few ingredients, this Whiskey Sour recipe is a timeless classic cocktail that can be enjoyed for any occasion. We’ve included instructions to make it the original way with egg white, as well as the more modern way without. Whichever you prefer, you can’t go wrong with this whiskey cocktail.

More classic cocktails to try include an old fashioned and a white russian.

Did you know that whiskey sours date back over a century? It’s said that they originated in the mid-1800s, making it one of the original whiskey cocktails. Though the technique and possibly some ingredients have changed, it’s still a strong, well-balanced drink.

Like most classic cocktails, a whiskey sour is made with just a handful of simple ingredients. Nothing fancy here, just contrasting flavors added together to pack a punch.

If you’re not a huge fan of whiskey or bourbon, this is a good recipe to start with as the lemon and egg white are a great distraction from the strong whiskey flavor.

What is a Whiskey Sour?

A traditional whiskey sour is made with whiskey, lemon juice, sugar, and an egg white. The egg white adds a creamy, rich flavor and a frothy texture to the surface, which is fun to drink.

Even though this age-old tradition dates back to the mid 1800’s, most bars don’t typically make it that way anymore and you’ll usually be served a whiskey sour without an egg white.

We’ve included a version with and without the egg below and you can decide which you like best!

There are just 5 ingredients in this classic whiskey sour cocktail.
(Scroll below to the printable recipe card for details and measurements.)

What’s the Best Whiskey for a Whiskey Sour?

Since whiskey is the star in this classic cocktail, you’ll want to use a high-quality one. That doesn’t necessarily mean the most expensive bottle you can find but definitely purchase a mid-price range whiskey. Bourbon is a type of whiskey and that’s what is normally used and what we prefer it for its sweeter flavor.

Try it with Maple Syrup

Some people replace the simple syrup with maple syrup, which is also good – try it!

How To Make A Whiskey Sour (Without Egg White)

A whiskey sour without egg whites is made in just 2 steps.

How to Make a Whiskey Sour (With Egg White)

If you want to make a classic whiskey sour with the egg white, you’ll need to add just one extra step.

How to Make Simple Syrup

Simple syrup is a mixture of equal parts water and sugar and is often used to sweeten cocktails since the sugar is already melted. While you can buy it pre-made at any liquor store, it’s also super easy to make yourself.

Just combine 1/2 cup of sugar and 1/2 cup of water in a saucepan, bringing it to a simmer until all of the sugar has dissolved. Allow to cool and add to your cocktails. It will last for 2 weeks when stored properly in the fridge.

Whether you serve it on the rocks or straight up, a whiskey sour is meant to be served chilled. Even if you’re a fan of room-temperature whiskey, it doesn’t go so well with egg whites or the other flavors in this drink. For garnish, Whiskey sours are typically served with an orange slice and a maraschino cherry on a toothpick. 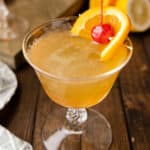 Made with just a few ingredients, this Whiskey Sour recipe is a timeless classic cocktail that can be enjoyed for any occasion. We've included instructions to make it the original way with egg white, as well as the more modern way without. Whichever you prefer, you can't go wrong with this whiskey cocktail.
Print Recipe Rate Recipe Pin Recipe
Prep Time 5 minutes
Total Time 5 minutes
Servings: 1 cocktail

*When using an egg white, you’ll want to do what’s called a “dry shake” which creates the best egg white foam. If you don’t do a dry shake, you end up with a flimsy foam layer. First, you shake all the ingredients without ice. This lets the protein in the egg form the foam and not get watered down by the ice. Then you’ll do a second shake with the ice, which chills the drink and makes the foam even stronger. (Or third option is a “reverse shake” where you do those 2 steps in reverse order.)

Calories: 244kcal | Carbohydrates: 27g | Protein: 3g | Fat: 1g | Saturated Fat: 1g | Sodium: 68mg | Potassium: 105mg | Fiber: 1g | Sugar: 25g | Vitamin A: 18IU | Vitamin C: 12mg | Calcium: 13mg | Iron: 1mg
Nutritional information given is an automatic calculation and can vary based on the exact products you use and any changes you make to the recipe. If these numbers are very important to you, I would recommend calculating them yourself.