Sofrito is a fantastic Puerto Rican aromatic flavor base of pureed onions, peppers, garlic, and herbs to bring all of your Hispanic dishes to life! You can buy it jarred, but homemade is so easy to make in minutes and of course the taste is a million times better.

Put this condiment to great use mixed into rice, beans, soups, and our Sofrito Chicken.

It seems like no matter what time or day I walk into my friend Roxana’s house, it smells amazing. She and her abuela are constantly cooking something. I watch, ask a ton of questions, and always end up begging for the recipe. I’m sharing her sofrito recipe today, handed down from generation to generation. Made up of onions, peppers, garlic, and herbs, which are blended together to create a paste-like puree. It takes only minutes to make and then it’s ready to be used in so many dishes, adding big, bold flavor.

Sofrito is a traditional flavor base puree used in tons of Puerto Rican and Caribbean dishes. As with most classic recipes, every family has their own version, but it typically includes onions, a variety of peppers, garlic, cilantro and culantro/recao. While you might think that sounds like salsa, it’s actually quite different in taste and especially texture, more like an Italian pesto. It immediately comes to life when a dollop hits hot oil in the pan. I love keeping some on hand to make chicken dishes, or to mix into soups, rice, or beans.

A bit of tomato sauce is added to Puerto Rican sofrito (which is usually green) when used in cooking. Red sofrito that’s sold in stores usually includes tomato sauce or paste mixed in. The color can also vary based on the type of peppers that are available to make it.

Here’s what you’ll need to make this sofrito recipe:
(Scroll below to the printable recipe card for details and measurements.)

How to Make Sofrito

It’s so easy to make this. Rinse and dry all the peppers. Remove the ribs and seeds, then roughly chop. Place all the peppers, chopped onion and garlic, cilantro, and culantro in the bowl of a food processor. Process until blended, but still has texture and not watery. This might need to be done in small batches.

It should have a similar consistency of pesto, like a thick paste. If it needs a little liquid, you can add a bit of water or olive oil while blending. But use as little as possible, so the mixture doesn’t end up loose and runny. Tip! Put the onions on the bottom before blending, since they give off a lot of liquid. Once blended, your sofrito is ready for immediate use.

How to Use Sofrito

Just like you would use a French mirepoix of mixed vegetables as a flavor base, sofrito is applied the same way. It gives your Hispanic recipes an amazing flavor boost. You simply add 1 or 2 tablespoons to hot oil and sauté until fragrant. It basically takes the place of onions and garlic in your dish since they’re already incorporated in the puree. I love keeping some on hand to make Sofrito Chicken or to mix into soups, rice, or beans.

This recipe makes about 4 cups. Since you’ll typically only use about 2 tablespoons in a recipe, I freeze the rest so I always have it on hand for later. But you can certainly store sofrito in an airtight jar in the fridge, too. 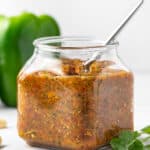 Calories: 5kcal | Carbohydrates: 1g | Protein: 1g | Fat: 1g | Saturated Fat: 1g | Polyunsaturated Fat: 1g | Monounsaturated Fat: 1g | Sodium: 6mg | Potassium: 25mg | Fiber: 1g | Sugar: 1g | Vitamin A: 201IU | Vitamin C: 10mg | Calcium: 2mg | Iron: 1mg
Nutritional information given is an automatic calculation and can vary based on the exact products you use and any changes you make to the recipe. If these numbers are very important to you, I would recommend calculating them yourself.