Sweet and tender, this Cinnamon Swirl Bread recipe comes together easily with just 30 minutes of prep. Enjoy a slice as toast with butter or make the most incredible French toast.

Love cinnamon like we do? Check out these Pumpkin Cinnamon Rolls, Snickerdoodle Cookies, and our highly rated Cinnamon Cake.

If you’ve ever felt intimidated by baking bread with yeast, get your toes wet with this recipe. Though it is made with yeast so it’s not a quick bread, it requires just 10 minutes of kneading and an hour to rise. Pop it in the oven and viola! less than an hour later, you have fluffy, soft bread with a sweet cinnamon swirl throughout. Bonus, the house smells amazing as it bakes.

Cinnamon swirl bread works for breakfast or dessert, toasted with a slather of butter (or cinnamon honey butter!), a slice is wonderful on its own or with a cup of coffee or tea.

This easy cinnamon bread is made with just a handful of kitchen staples. Here’s what you’ll need:
(Scroll below to the printable recipe card for details and measurements.)

Make Cinnamon Raisin Bread. For some added sweetness, texture and flavor, you can add raisins to the cinnamon mixture. If you decide to add raisins, it is best to pulse them in a food processor with the sugar, flour, and cinnamon filling mixture. This will make them small enough so that they don’t create extra air pockets in the bread. Try to get them down to less than a 1/4-inch size.

How to Make Cinnamon Swirl Bread

With just a bit of kneading and a short rise time, this cinnamon swirl bread is surprisingly easy to make. Don’t let the yeast scare you!
(Don’t miss the detailed printable recipe card below.)

There are so many ways to serve this cinnamon swirl bread! You can simply enjoy a slice on its own or add a smear of butter or peanut butter. It’s wonderful soft and also toasted. If you love cinnamon flavor like we do, try slathering a slice with our homemade cinnamon butter (Heaven!)

This bread also makes amazing French toast for a special breakfast or brunch, or use it in our French Toast Roll Ups.

How to Store Leftovers

Storing leftovers: You can store your cinnamon swirl loaf on the counter for up to 4 days. Secure it in plastic wrap, store it in a ziploc bag, or another airtight container to maintain freshness.
Can I freeze cinnamon bread? Yep! I love making two loaves of this bread at the same time to have an extra one to pop in the freezer. You can freeze an entire loaf or individual slices. Wrap it in both plastic wrap and aluminum foil to prevent freezer burn. It will keep in the freezer for 2-3 months. Thaw on the counter before enjoying. 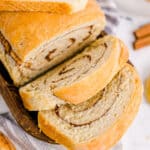 For the cinnamon filling:

Calories: 158kcal | Carbohydrates: 29g | Protein: 5g | Fat: 2g | Saturated Fat: 1g | Polyunsaturated Fat: 1g | Monounsaturated Fat: 1g | Trans Fat: 1g | Cholesterol: 15mg | Sodium: 168mg | Potassium: 70mg | Fiber: 1g | Sugar: 5g | Vitamin A: 72IU | Vitamin C: 1mg | Calcium: 22mg | Iron: 2mg
Nutritional information given is an automatic calculation and can vary based on the exact products you use and any changes you make to the recipe. If these numbers are very important to you, I would recommend calculating them yourself.