This Cinnamon-Sugar Star Bread is an absolute show-stopper for the holidays, but surprisingly easy to make! Enjoy warm by itself sprinkled with powdered sugar or with a simple cream cheese icing for dunking.

More breads we love to serve at Christmas time include our popovers and cinnamon swirl bread.

Want to make a dessert that’s going to make jaws drop? This Cinnamon Sugar Star Bread is it! With an absolutely beautiful presentation, it’s perfect for all occasions from holidays to casual brunches. Though it’s commonly referred to as Christmas star bread, I think it deserves a place on the table throughout the year.

And the best part? Though it looks super fancy, it’s surprisingly easy to make!

Like any yeast bread recipe, you will want to dedicate a few hours to making this star bread. The dough needs to rise twice and the assembly of the star formation does take a few minutes. But don’t worry, you’ll need no tools other than kitchen shears or a good knife and no fancy baking skills either.

This Christmas star bread recipe is made with a handful of pantry staples, potato flakes, and yeast.
(Scroll below to the printable recipe card for details and measurements.)

Can I Use Active Dry Yeast?

Yes! Before you begin, place the active dry yeast in a measuring cup with the warm milk, and a generous pinch of the sugar (about 1/4 teaspoon), allow it to foam for about 10 minutes before adding it to the mixing bowl with the other wet ingredients. Good active yeast will nearly double in size after about 10 minutes.

A Few Notes on the Milk

Here are a few tips for warming the milk used in this recipe. If the milk is too hot or too cold, the recipe won’t work properly.

Star bread may look complicated but as long as you have some patience, it’s far easier to make than you might think! No special tools or skills are required.
(Scroll down to the printable recipe card for details and measurements, and don’t miss the video below.)

Here are a few tips for making star bread even easier. 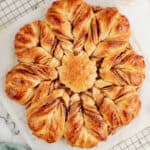