Tender and moist, these Baked Apple Cider Donuts are dipped in cinnamon-sugar for an easy treat with warm fall flavors in every bite. Great for breakfast, brunch, or dessert with a glass of milk or cup of coffee!

Other donuts we love include our Baked Apple Fritters and deep fried Jelly Donuts!

If you’ve never made homemade donuts before, this is a great first recipe to try! There’s no yeast involved in this dough, no deep frying, and you don’t need any special skills – just baking staples, some bowls, a whisk, and a donut pan.

This old-fashioned baked apple cider donut recipe is no more difficult to whip up than muffins and makes such a delicious fall breakfast treat. We think starting the morning off with a freshly baked donut just makes the day better right off the bat!

These are homemade donuts without yeast and no deep frying, so they’re made with just a handful of baking staples and, of course, apple cider. Here’s what you’ll need:
(Scroll below to the printable recipe card for details and measurements.)

Making these baked apple cider donuts is easy and only requires some bowls, a whisk, and a donut pan. Here’s a brief summary:
(Scroll down to the complete printable recipe card for details.) 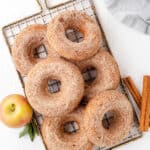 Calories: 174kcal | Carbohydrates: 29g | Protein: 2g | Fat: 5g | Saturated Fat: 3g | Polyunsaturated Fat: 1g | Monounsaturated Fat: 1g | Trans Fat: 1g | Cholesterol: 24mg | Sodium: 189mg | Potassium: 110mg | Fiber: 1g | Sugar: 18g | Vitamin A: 173IU | Vitamin C: 1mg | Calcium: 45mg | Iron: 1mg
Nutritional information given is an automatic calculation and can vary based on the exact products you use and any changes you make to the recipe. If these numbers are very important to you, I would recommend calculating them yourself.