There’s nothing quite like a Muffuletta! This classic New Orleans sandwich consists of sturdy bread, zesty olive salad, and layers of Italian cold cuts and cheese. Its impressive size, appearance, and unique flavor make it a force in the sandwich world.

What is a Muffuletta?

A Muffuletta (pronounced moof-fuh-LEHT-tuh) is a classic sandwich, originating at a Sicilian Deli in New Orleans, dating back to the 1900’s. Today, they’re found in joints all over New Orleans, from grocery stores, delis, bowling alleys…you name it.

The sandwich starts with a round loaf of muffuletta sesame bread, topped with tangy olive salad, and layer upon layer of Italian cold-cuts and cheese. It’s gigantic! They’re somewhat labor intensive to make, but the pay off is worth it. There’s nothing quite like a muffuletta sandwich!

Is this an Authentic Muffuletta Recipe?

It’s close! A traditional Muffuletta consists of olive salad, layers of thinly-sliced Italian meats, and cheese, all bookended between a specific sesame bread that is round and pretty flat, about 8-10 inches in diameter.

There are a few key components that set this sandwich apart from others.

Other Classic Sandwiches We Love 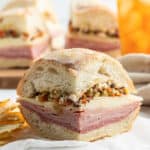 For the Olive Salad